To Be 38: My First Visit to Thailand

Where I visited, what I ate, and a few travel tips for those planning to visit BKK for the first time.

For the past years, a month before, after, or exactly my birthday, I would travel. I would take a trip alone to a place that’s either I’ve never been to or a place that I know I’d be happy to visit again. Usually it would only be within the Philippines, my badly bruised but astoundingly beautiful country with so many good beaches that I’ve yet to discover, but this year, I planned a different route for my 38th.

Early 2017, I found out that the number one band on my virtual Bands to See Before I Die list will finally push through with their visit in Southeast Asia. I swore to myself that I have to watch the Foo Fighters before I leave this planet and finding out that they were going to have a concert in Singapore and Bangkok was my chance to finally turn that dream into reality. That story would be dedicated for another post though. So, the original plan was to book my ticket for the show in Singapore since I consider it my second country. I just love that place, it’s familiar because it’s the only other country that I’ve been to the most. Everything in Singapore is just convenient, expensive but convenient. But last minute, I decided to change my plans and book a trip to Bangkok instead. Why? Because I haven’t been to Bangkok and watching one of my favorite bands there would be the best reason to spend a few extra days to roam-around a foreign city. Adventure!

Fast forward to August 23, the day of my flight, I saw some of my friends who were also going to watch the concert and will be on the same flight as me. When we all arrived at Suvarnabhumi International Airport, we went our separate ways. I booked myself at the Botanic Service Room, just a few minutes away from the concert venue but about an hour away from the airport. It’s a hip, affordable, and nice hotel at Pakred, Nonthaburi. 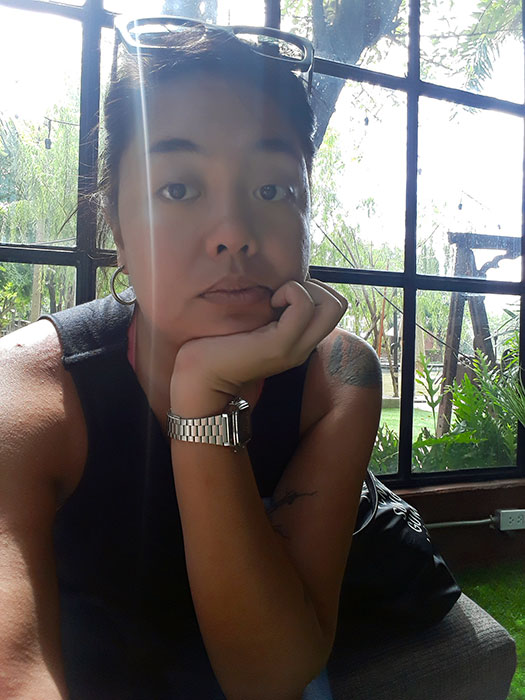 The waiting area at the hotel 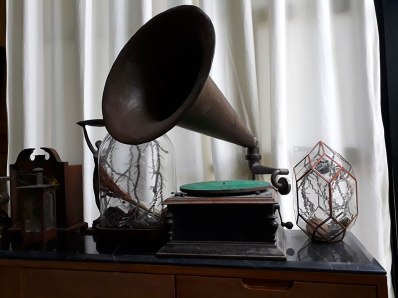 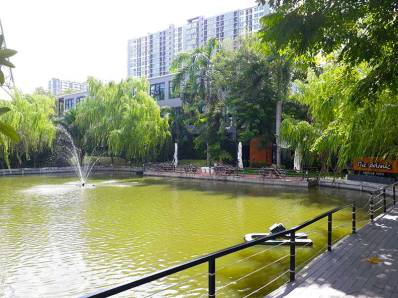 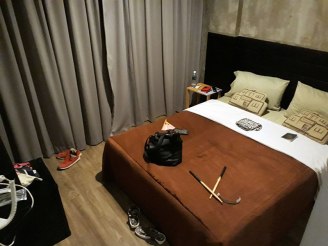 Yep, what a mess

By the way, Pakred is far away from the ideal places to visit when you’re in Bangkok so take note of that, it is however near the Impact Hall where the concert was held, and already mid-way to Chatuchak Market. I made the mistake of not planning this trip thoroughly and map out how to commute in Bangkok. They also have their highly functional metro trains and I think taking the bus is easy too and cheaper. But when I was there, the entire time I ended up riding an Uber and Grab, which were more expensive as expected.  Anyway, after checking in, I went to Impact Hall to check out the venue and find a place to eat. Impact Muang Thong Thani is an area in Bangkok where exhibits and concerts are usually held. If I were to find a spot here in Manila like Impact, it would have to be the SM Mall of Asia grounds minus the mall. I had lunch at the Food Arena, a food court, where I had Pad Thai. For those of you who don’t know me personally, aside from being an extreme onion hater, I’m also pretty useless at eating spicy food. And one thing that’s a bit evident in Thailand is that most Thais have difficulty communicating in English so explaining to the cook that I didn’t want my food to be spicy took a bit of time. My Pad Thai still ended up hot but it was still good though. Eventually, thanks to a friend of mine who visited Thailand a week before I did, taught me the Thai phrase on how to say “not spicy,” it’s “mai phet” so after that, ordering food in Bangkok got easier for me.

Remedy for the spicy Pad Thai

Day two was concert day. I saw my friends again at the Impact Hall and a few more familiar faces that flew all the way from the Philippines, just like me, to watch the concert. Like what I said earlier, the concert will be for a different post because it will be filled with more photos and an unbelievable story of patience and luck. Haaaay! Okay, let’s go to day three, shall we?

I decided to go to the Nakhon area where the series of “must visit” places in Bangkok are situated. First stop, the Grand Palace. The place was where the royalties of Thailand used to reside, although they no longer live there, the Grand Palace is still being used for official events and ceremonies. Since it was decreed that there will be a year-long mourning period for the death of their king, Bhumibol Adulyadej a.k.a. King Bhumibol the Great, the practice was still on-going during my visit. There were lines and lines of Thais wearing nothing but all black clothing from top to bottom. The Grand Palace is vast with different areas wherein you can see numerous gardens, buildings, temples, and pavilions. Every building and pavilion were very elaborate; every wall detailed with glass mosaics. Even the figures were made so intricately, I was always awestruck by how meticulously every structure were done.

Grand Palace. View from the outside 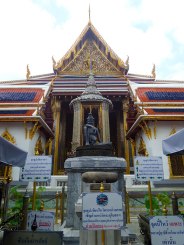 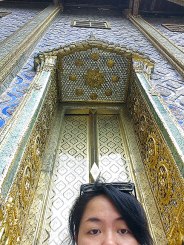 I want this door in my house 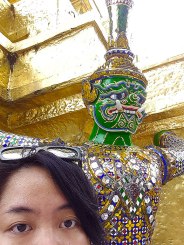 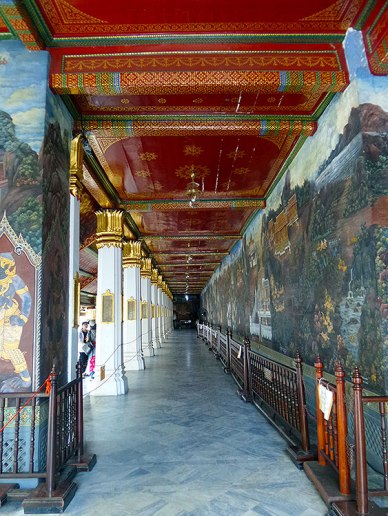 Not allowed to enter 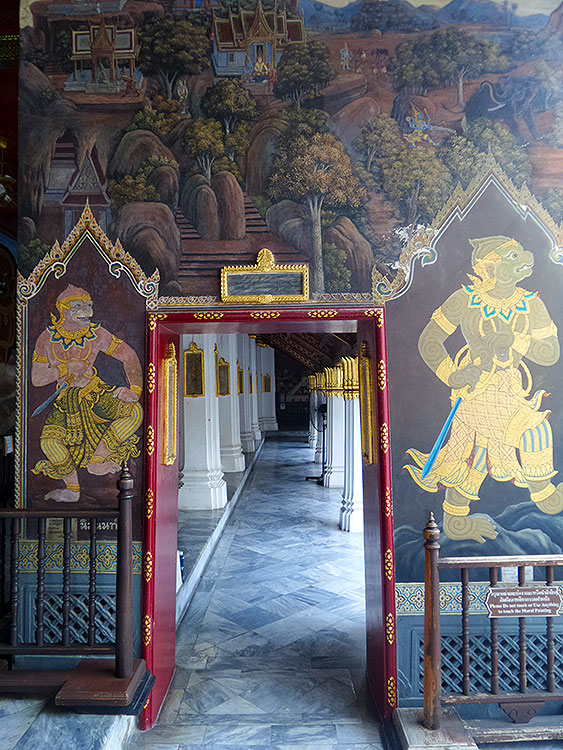 Not allowed to enter

I walked a few blocks from the Grand Palace to go to Wat Pho to see the reclining Buddha. According to Wikipedia, Wat Pho is one of the largest and oldest wats in Thailand. There were a lot of areas that were cordoned off and can’t be entered by tourists so I just went straight to the chapel where the reclining Buddha resides. The gold-plated Buddha is one of the largest statues in Thailand, it’s 46 meters long and 15 meters high. It was a bit difficult to take a photo with it because of its enormity, but hey, I tried.

She’s behind me isn’t she?

My attempt of a selfie 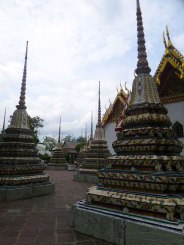 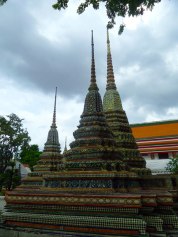 I ate lunch at Tang Heng Kee beside Wat Pho, and I had their pork with mushroom and gravy and rolls. They were good!

After hours of walking, I went to the Khao San area to wait for my Uber and I hung out at the Bangkok City Library.

Wearing the most uncomfortable thing in BKK 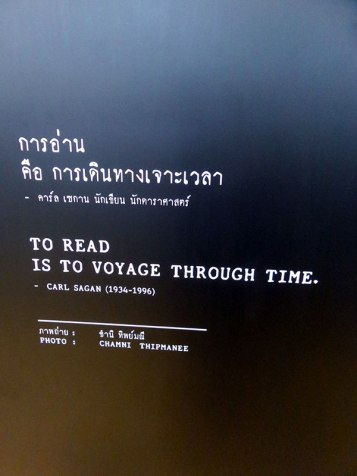 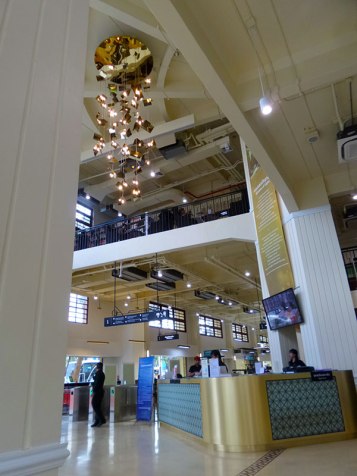 For day four in Bangkok, I decided to go to Chatuchak Weekend Market since everyone on my feed in Facebook told me to go there. Here, you can buy so many things from locally made furniture, clothes, food, bags, and anything that you can possibly think of. It was both fortunate and unfortunate that I wasn’t really in a shopping mood so the only thing that I was able to buy was food (of course) and this really comfortable pants that everyone was wearing. I went around the market several times thinking of what to buy that I might need but after about two and a half hours of walking, I gave up. 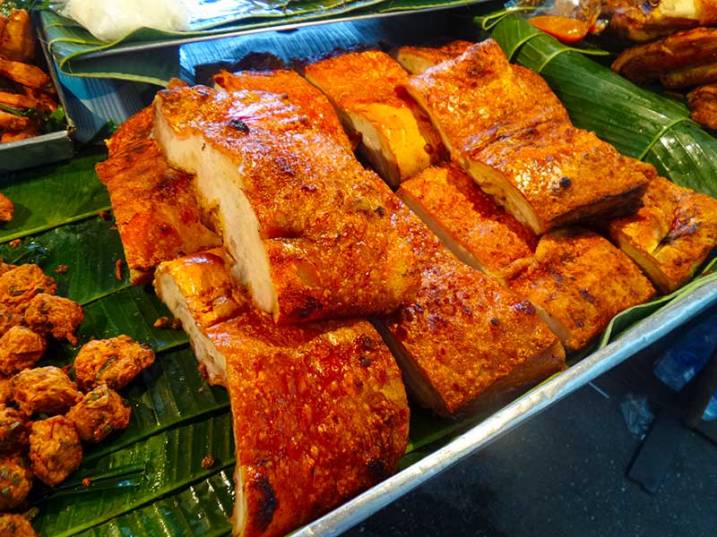 Oh hey, I need to buy some soap 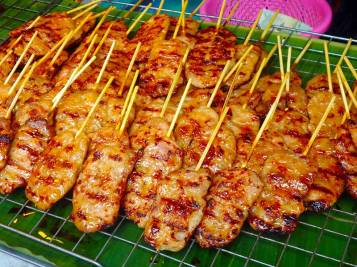 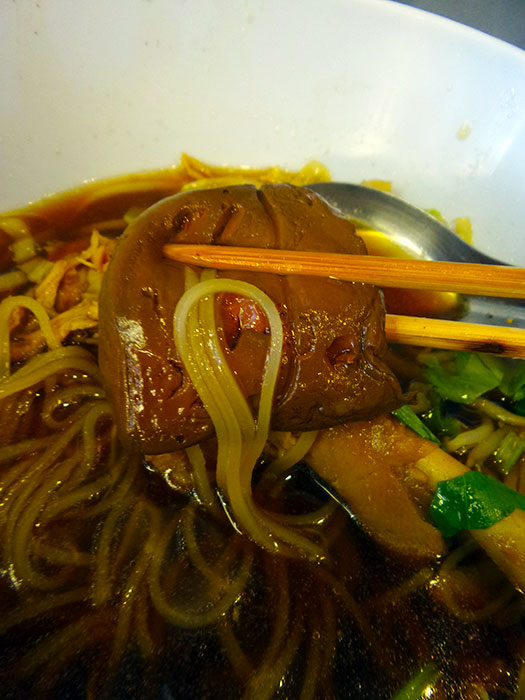 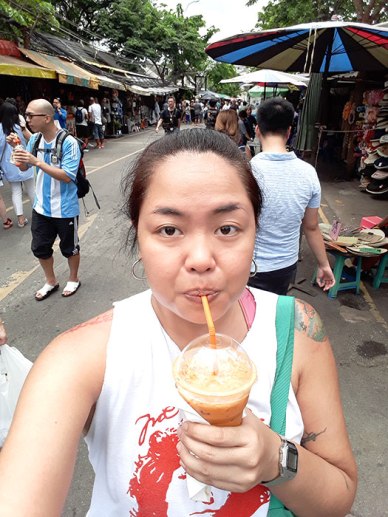 Love me some Thai tea

My Bangkok trip was short and poorly planned but I have no regrets spending my pre-birthday lamyerda there. I had one of the best times of my life being able to watch the Foo Fighters live and again, discover a city from another country. I would love to go back to Bangkok or go to different parts of Thailand to fully see the beauty of the country. But for now, kob khun, Bangkok.

Here are some notes to consider for first timers who would want to visit Bangkok:

MAKE SURE THAT YOU PLAN YOUR TRIP THOROUGHLY.

I’m that kind of traveler, I guess. There are those who just wing it and there are some of us who would like to keep an adjustable itinerary. At least have an outline of where and when you want to go basing it on the number of days that you’ll be staying in Bangkok. Also figure out what’s more important for you—culture or shopping? Answer that question then you can start plotting your stops and where to stay from there.

On my trip, I’ve only encountered a few Thais who can fluently speak and understand English. It was a bit difficult for me to explain and ask a few things so, in order for you to avoid the same predicament, here are some basic Thai phrases that you can learn:

FAMILIARIZE YOURSELF WITH THEIR PUBLIC TRANSPORT

Commuting is easier in Bangkok compared to Manila although can I just say, and this is a fact, traffic is bad there. I thought we have the worst traffic in Manila, but, man, traffic jams in Bangkok are awful. So, if you’re on a budget, figure out how to commute from one destination to another by either taking the bus or the train. I’m sure that it’s way cheaper than taking an Uber, Grab, or taxi, although, if comfort is more important for you then by all means, stay comfortable. Have a map or an app that can help you with transport in Bangkok.

Like me, I needed data when I was there for posting on social media, checking my email and Viber because of work, getting Uber and Grab, as well as checking Waze. To avoid the hassle of paying extra for roaming, buy a sim card. Sim cards are available at the airport and in 711. Just make sure to have your passport with you when you do this because they use it for encoding.

BRING CLOTHES THAT ARE COMFORTABLE AND LIGHT

It is very humid in Bangkok so bring clothes that are comfortable to wear for long walks and tremendous heat. There are certain tourist places that will restrict you from entering if you’re wearing a tank top and shorts, like at the Grand Palace and a few others, so make sure to also pack a comfy shirt and pants. 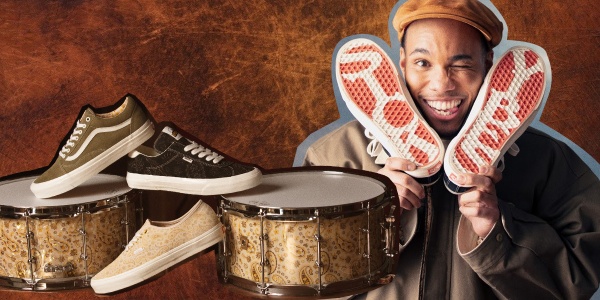 Proof, the First Anthology Album of BTS, is Out Now! 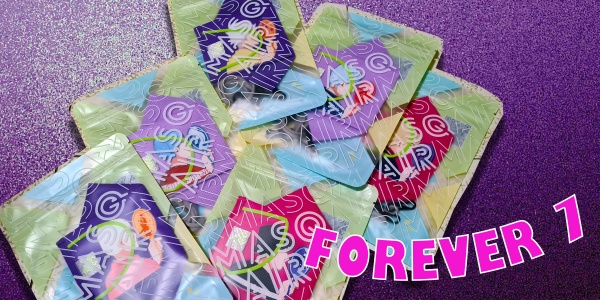