It has already been a tradition that I leave for vacation a month before or after my birth month. This year, I waited for nine months until I was able to go to Bohol, my chosen destination for my pre-birthday vacation. I booked my flight last December via Cebu Pacific’s Piso fare. I’ve always wanted to go to Bohol because I’ve been hearing so many good things about the place, especially its pristine beaches. It wasn’t a difficult decision really; there wasn’t any contest in my head at that time on where I wanted to go. I think I was already sold with the idea of heading to Bohol as early as November last year. Early this year, I was able to convince my friend Peggy to go with me. I already did my crowd sourcing pretty early to where we can stay in Bohol. Everyone told me to stay in Panglao, where the beach is really nice, so okay, that’s a check. Now where exactly in Panglao was the next question. As much as I would want to stay in the fanciest of resorts there, 1) I can’t afford it; 2) sayang lang because I would always be out discovering the place anyway so goodbye Bellevue, Amorita, Eskaya, and South Palms. A friend of mine from Cebu recommended Dumaluan Beach Resort, and upon checking, their accommodation rate was within my budget, and I saw photos from their Facebook and it looked okay. We availed their Superior Deluxe room with the 2 day tour package, a city and island tour. So in pictures, here’s what happened. 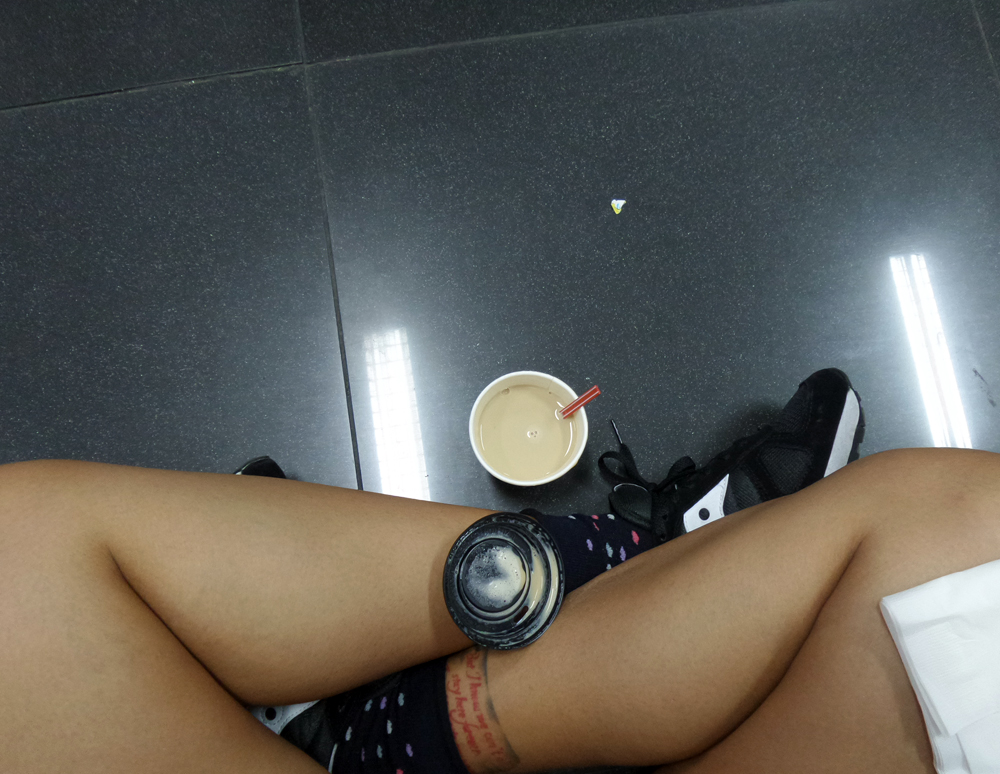 Apparently for some passengers, their luggage are far more important to be comfortable and to sit on the chair than for other humans. It was too early to argue with anyone so I just had coffee on the floor.

I wasn’t sitting with anyone. Forever alone!

The obligatory selfie inside the airplane shot

It’s amazing how our flight going to Tagbilaran and going back to Manila didn’t have any delays. I think that’s a first for me. I was already expecting at least an hour delay for each trips but no! We left on time for both flights, so cheers to Cebu Pacific! Magaling! Magaling! 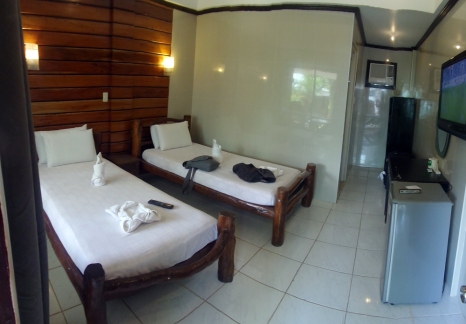 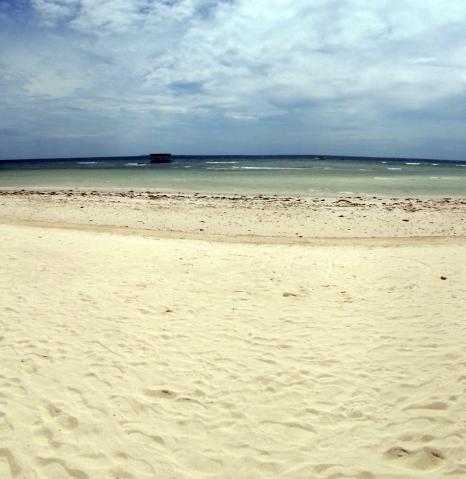 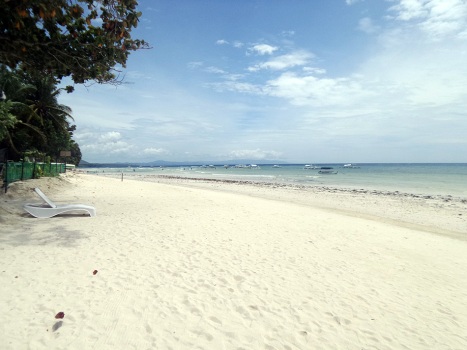 Our lunch on the first day

I named him Patrick

The sand was so smooth, it was like mud when wet. It reminded me so much of the sand in one of the islands that I visited in Caramoan 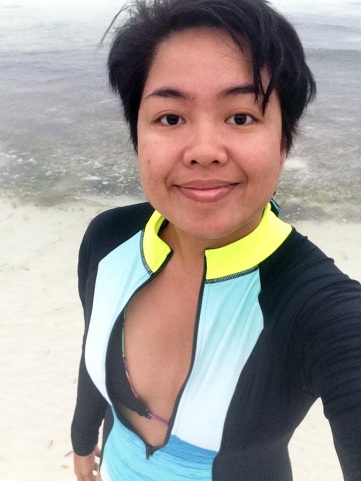 Where shall we go?

Our driver Kuya Manny was one of the nicest drivers I’ve ever met. He’s very soft spoken and always opened the door for us. He didn’t have to and I was a bit shy that he would do it so I would always open the door of the van immediately whenever we stop on our destination. Sayang, I forgot to take a picture of him. 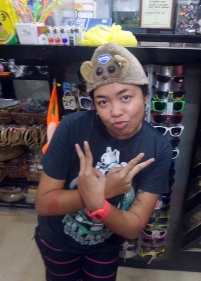 Too bad that this Tarsier cap is small for me or else, I would have rocked this, yo! 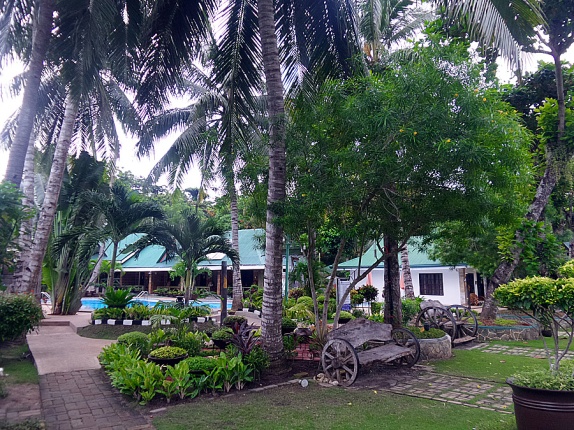 Breakfast before checking out Bohol 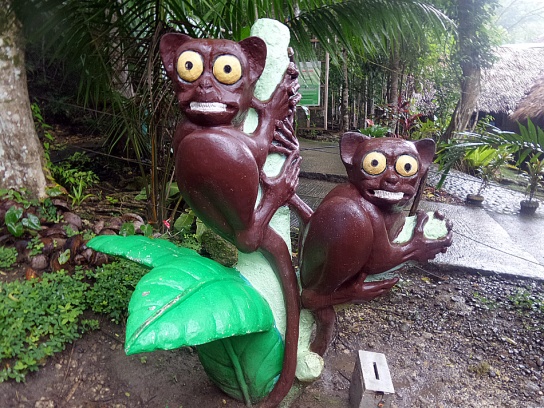 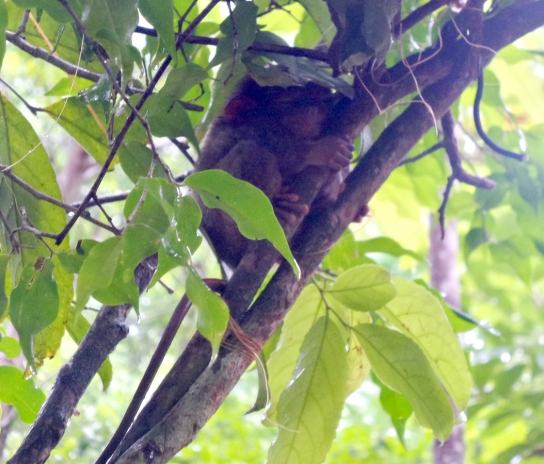 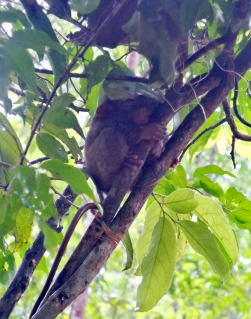 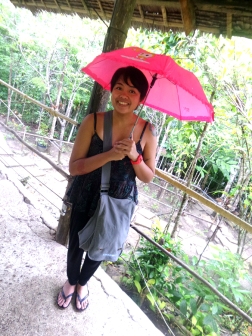 I wanted to take this tiny pink umbrella home with me 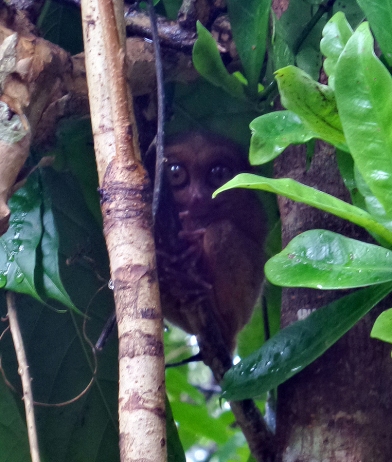 The chichaworm. I bought a pack each for my officemates. They liked it, I should have bought more.

Be one with nature

At the butterfly sanctuary

Atlas moth or the Mariposa, the largest moth in the world 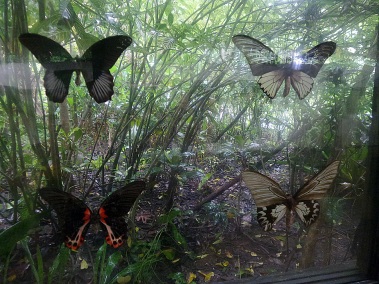 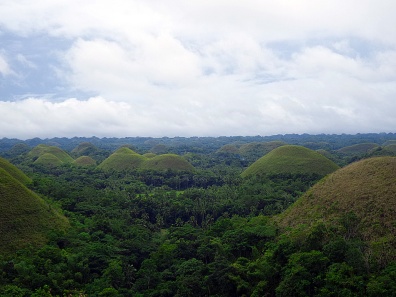 With Peggy at the Sipatan Hanging Bridge

We had lunch on a moving raft along the Loboc river 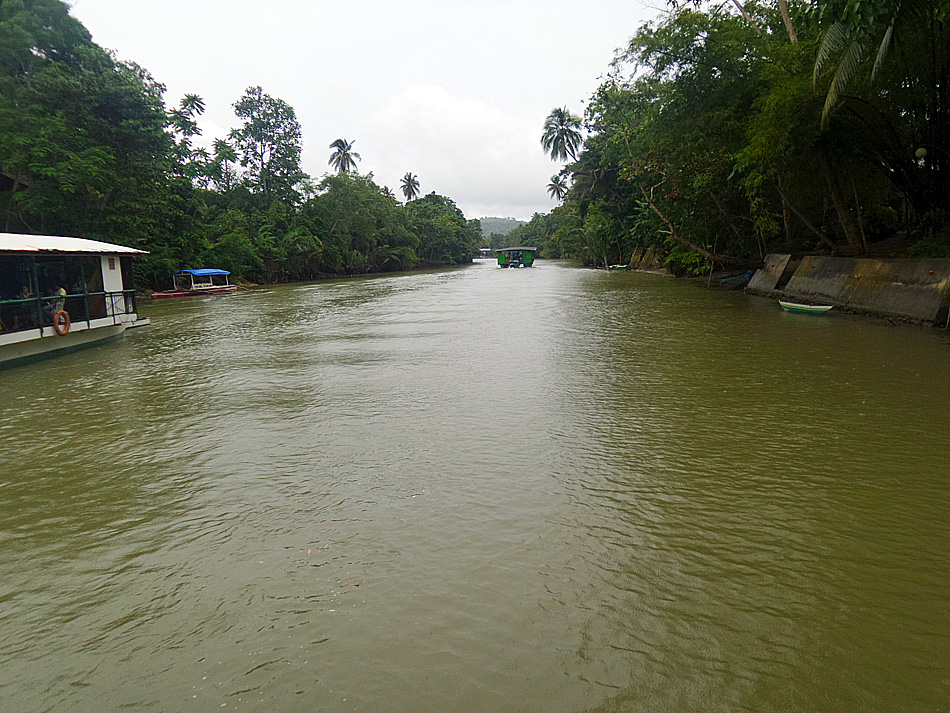 After lunch, we went to the Baclayon Python Sanctuary 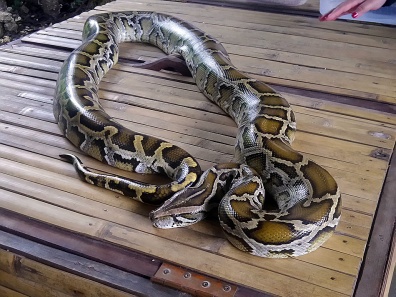 I can’t believe I touched a snake. I then realized that I don’t like snake. 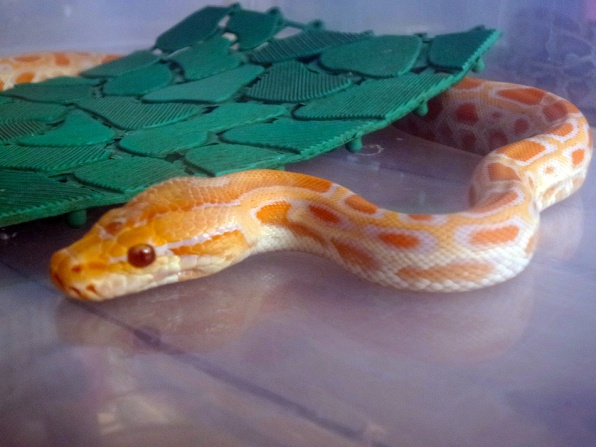 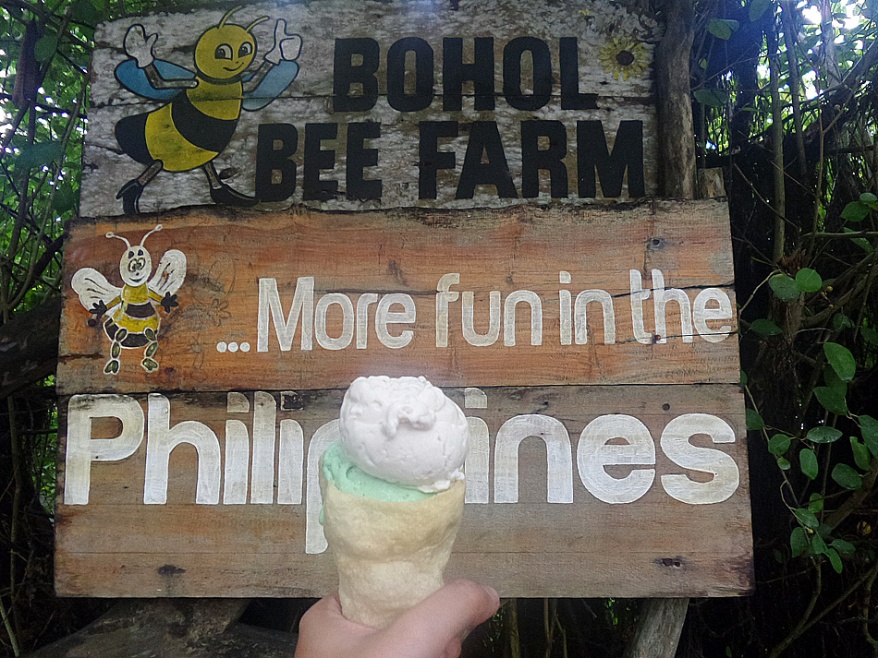 Ate from the counter said that the best sellers are the guyabano and malunggay flavored ice cream, so I got those. I especially loved the cone!

The Bee Farm wasn’t supposed to be part of the tour but we charmed our way to Kuya Manny, and he agreed to take us to the place. I just wanted my ice cream.

Day 2 of the tour. We went to Balicasag Island to snorkel. We were supposed to watch dolphins but our boatman said that they don’t normally come out whenever the waves are strong, which it was that day.

A rainbow from Papa Jesus

For our tour, payment for the boatman and the rental of the small boat to go snorkeling weren’t included in the package. So we had to pay for an extra P250 each for it. Then we found out that there’s a separate payment should we want to see sea turtles, it was an extra P150 each. We had lunch there and the food was more expensive than the food at the resort, which wasn’t that cheap either. So, an advice to anyone who wants to go to Balicasag, if you can bring food, do so. 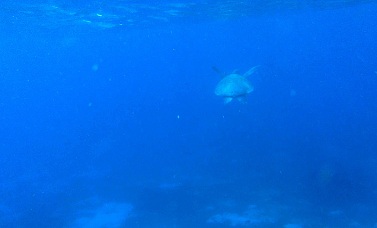 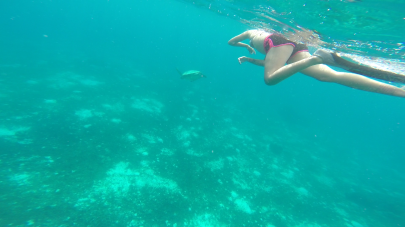 Trying to swim with the sea turtle

One happy 35-year old woman
THEN

I got sick! Of all days and places, seriously?! Upon arriving from our morning of snorkeling in Balicasag, I felt my eyes burning up and my throat hurting. I think it was because I got really cold while we were on our boat going back to Dumaluan. It was drizzling a bit and the wind was biting. I forgot to bring a rash guard during the trip. I normally don’t bring a rash guard with me unless I know that I’ll be surfing but lesson learned, I would bring one always in my beach trips. I don’t go out of town without my doctor nanay checking my medicine kit if it’s complete with all the drugs that I’ll be needing but unfortunately, we missed out on decongestants this time. Good thing the resort’s souvenir store was selling, and I bought Neozep to help me sleep. I rested the entire day. What a waste. Tsk. 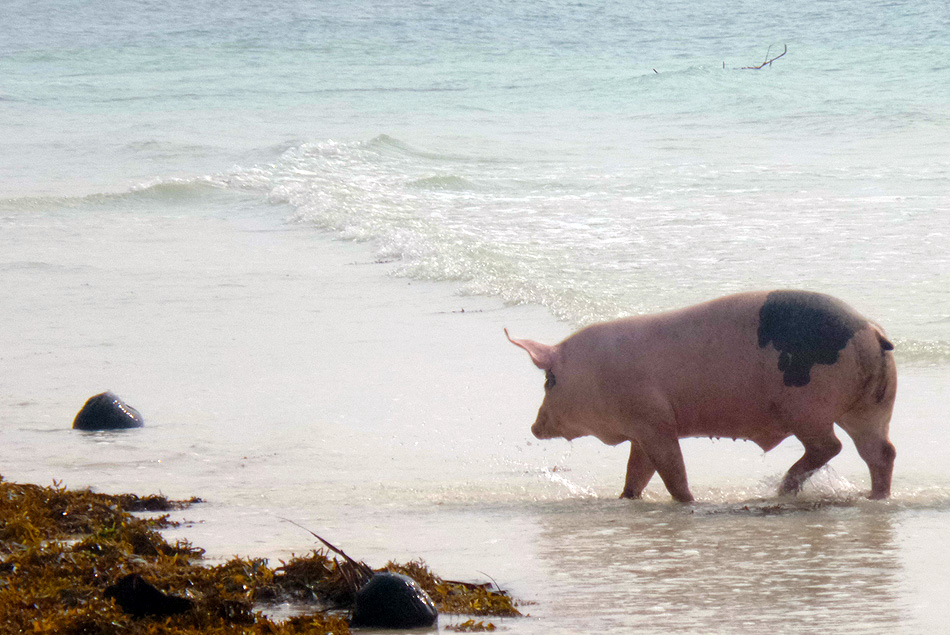 My lunch taking a bath hehehe

Dumaluan Beach Resort. I recommend this resort to anyone who is looking for a reasonable place to stay in Panglao. If you’re on a budget but you want to stay in a clean, and comfortable place, this resort is okay. The staff were also very helpful and nice. The food is not cheap but it’s good. Oh but they put too much chlorine in their pool so if you’re planning to swim, make sure to use goggles so your eyes wont hurt.

No fever couldn’t stop me from seeing fireflies.

I swear! These are fireflies!

I had my cardio fix. That was two hours of rowing.
I was feeling a little better, so for our last night in Bohol, Peggy and I decided to take the Firefly Eco-friend tour. It’s eco-friendly because we kayaked our way to the river and didn’t use a motor boat. It took us two hours of kayaking and I really felt it all over my upper body the next day. Good workout! The fireflies were like blinking Christmas lights on trees. They were so beautiful.

Being 36 is just another number. Although this year, I’ve made improvements on myself that I’m proud of. First would be my better relationship with the Lord. Deciding to be a Christian is one of the best decisions that I’ve made in a while. It made my faith in God stronger. It made me calmer and hopeful that things in my life will be okay. I learned how to pray again, and actually listen to what God wants me to do. I’m still a very stubborn woman but I try not to give in too much on my stubbornness knowing that it will put me to harm in the end. I lost a few friends in my life this year, a few I’m having difficulty coming to terms with, and one that I’ve finally let go. I find letting go of people difficult, for one, there’s already love involved but that’s the thing I guess, if you truly love them, and especially yourself, it’s better to let them leave if they want to. There’s no point in letting people stay in your life knowing that they want out. For four years, I’ve loved and surrendered myself to someone who never cared for me, who never gave an ounce of concern for my well-being and yet, I was always there for him. It was no one’s fault but mine, so in the end, it was no one’s decision to leave but mine. But during the process, I lost friends, I lost myself, I might not be able to gain some of the friends back but I know I’m beginning to get myself back. Anyway, here are a few more things that I’ve learned during my 36 years of existence.