Killing time with photographer SHAIRA LUNA over crêpe and coffee

By Denise J. Mallabo in drinkswithdenise on December 15, 2017
No comments

She’s one in demand individual and not only because she’s one of the most bankable photographers in town, but because she’s also a very interesting person with an equally fascinating closet. Shaira Luna loves to go thrift shopping a.k.a. magukay. I haven’t really had the pleasure of joining her in one of her ukay trips but she’s being featured in publications left and right about it. Recently, we’ve just featured her in STATUS because it was our ThrowbackIssue and Shaira has been working on some pretty lovely retro themed works, which she would take photos of and style. She produces her own photo shoots when she’s not busy doing photo shoots for other people. She enjoys it. She needs to do it like her body is begging for her to click that camera almost all the time.

She’s a gifted person, this one. Oooppsss, sorry, Shaira, I just had to hahaha! But true though. Have you seen her play the drums? I think whatever she sets her mind into, she does it, and doesn’t stop until she’s good and happy with it, like her inks for example. I love her tattoos. She has a whole lot all over her body. You might see it somewhat misplaced but I’m sure she has her reasons for them being where they are. She’s methodical like that.

We decided to meet up at Crêpe Amelie in A-Venue. She just finished a shoot at a studio in the building and had ample time to do this interview until she does another one. I ordered the butter and sugar crêpe and she ordered her black coffee, her favorite drink. I vowed not to taste such coffee because I know my heart would go ballistic, so I allowed her to just enjoy hers. Read our conversation about what kind of person she doesn’t like, where she wants stay for five days, and who she would want to take her pictures.

You assigned me to shoot Rommel Dela Cruz for BURN. It’s still one of my favorite musician portraits up to this day. So thank you for getting me for that.

I think I was one of the people who assigned her first editorial gig, if I’m not mistaken. It was a shoot for our then music magazine BURN and it was with bassist Rommel Dela Cruz. We would have a section in the magazine wherein musicians were given a page to teach either a specific song or discuss a musical technique. After that, we would get her to shoot or cover events for us. 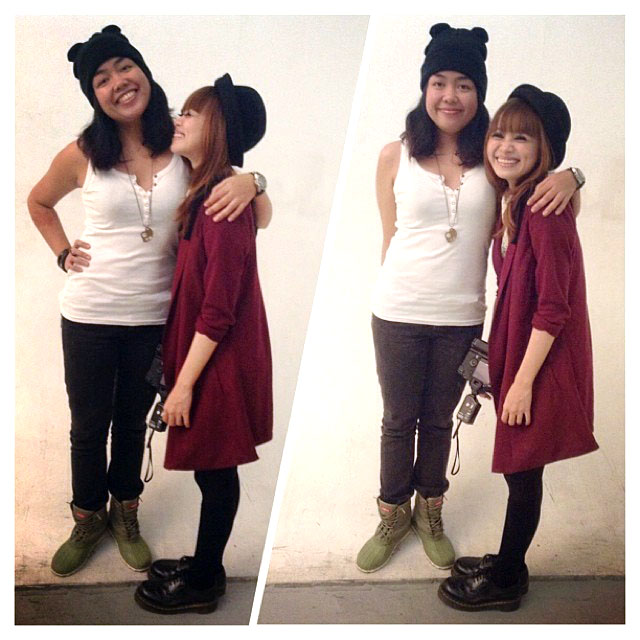 IF YOU CAN STAY IN A PLACE FOR FIVE DAYS STARTING TONIGHT, WHERE WOULD IT BE AND WHAT WILL YOU DO THERE?

Shaira: Maybe go to Williamsburg or anywhere in Brooklyn, magthithrift shop, maglalakad, and people watch. I like the pace in New York. Everyone is always moving, like me, I can’t sit still.

WHAT CAN YOU EAT EVERYDAY WITHOUT GETTING TIRED OF IT?

Shaira: Anything with gata and sili. Anything na pwedeng lagyan nun, either fish, meat, or vegetables. Also anything with sour cream. I put sour cream on anything. Every morning, anything that’s leftover sa fridge, buhusan mo lang ng sour cream, so good!

“Sometimes, you can be an asshole but you don’t realize that you’re being one, but people who are assholes and are proud of being assholes that sort of makes me feel bad.”

WHO IS THE MOST BADASS PERSON THAT YOU CAN THINK OF RIGHT NOW AND WHY?

Shaira: I don’t think I know a lot of badass people.

D: But who do you think can getaway with anything?

Shaira: Florence Welch. She’s very talented and I think that she can getaway with anything without looking like a stereotypical badass. She’s badass for being such a girl, but such a witch in her own right. I think her witchiness is badass. It’s hard for people to be badass and still look good so I think that’s extra badass.

WHAT MAKES YOUR DAY BAD AND HOW DO YOU MAKE IT GOOD AGAIN?

Shaira: When people are bad vibing other people. When people give other people a hard time unnecessarily. If people are being assholes and they know it. Sometimes, you can be an asshole but you don’t realize that you’re being one, but people who are assholes and are proud of being assholes that sort of makes me feel bad. It doesn’t give me a bad day but it just makes me say “why?”

D: But how do you cope when you’re the one being agitated?

Shaira: Oh no! You’ll know if I’m annoyed, it’s when I stop grinning. Because I’m normally smiley faced. I’m pretty good at concealing my emotions, although there was this one time that I flipped someone off. I felt so bad. I wrote it on Facebook, I felt so guilty. He overtook me and I got mad, so I flipped him off. But I’m never doing that again. Never ever.

D: You are such a nice person!

WHEN WAS THE LAST TIME YOU CRIED AND WHY?

Shaira: For sure I was watching something on YouTube, probably it’s one of those clips from America’s Got Talent. Someone sang an old song and then I tear up a bit.

WHO WOULD YOU WANT TO TAKE A PHOTO OF YOU?

Shaira: Jane Birkin’s brother. Jane Birkin is one of my favorite ever people from the 60s. When she was growing up, her brother would always take her photos. They have a book e; it’s all photos of Jane Birkin growing up, getting married, and having a family taken by her brother, not a celebrity photographer but he was just shooting his sister. Maybe I can relate to that because my brother shoots all my photos.

WHY IS YOUR FAVORITE DRINK BLACK COFFEE?

Shaira: Because it’s healthier than Coke Zero and it takes longer for me to drink. Kasi yung Coke Zero parang isang hingahan ko lang. I can drink three cups of this a day—one when I wake up, then when I’m shooting, and before I go to sleep. For some reason it calms me. It slows my pace. Coffee relaxes me; I think it’s the slow sipping.